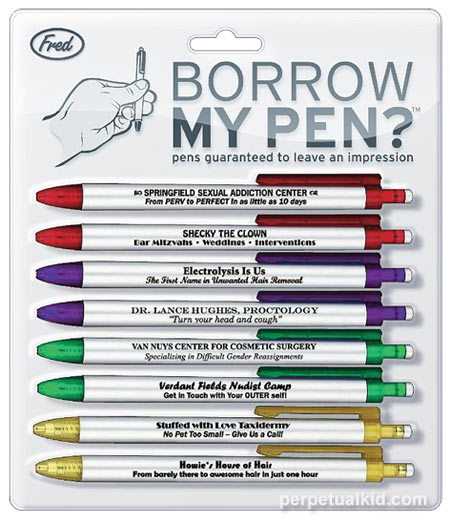 I’ve had it up to here (insert imaginary height chart here) with people stealing my pens! I gave it to you for three seconds, not your entire lifetime. I’m especially sick of having to high-tail it to my nearest office supply store (since Coolest Gadgets doesn’t have a supply cabinet to steal from) just so I can buy a new pack of pens which will eventually be stolen.

Well, not anymore! I’m taking a stand against all of you pen hoarders. I mean, really, where do all of these pens wind up? Is there some crazy pen collector who has piles of writing utensils? Don’t get me wrong. I love pens. I used to be quite the pen connoisseur. That was until I had my Dr. Grip stolen from me one too many times. Now? I just get these “Borrow My Pen?” writing tools. Pen thievery doesn’t happen nearly as much anymore.

Each pen in the “Borrow My Pen?” set includes a brash or politically incorrect statement which makes the pen less desirable than your typical Bic. Who really wants to be known as the guy who stole the “Stuffed with Love Taxidermy, No Pet Too Small, Give Us a Call” pen? Not I. Not I, indeed.

If you’re as fed up with pen thieves as I am, you can grab your own set of “Borrow My Pen?” pens from perpetualkid for $6.99 a pop. And if you don’t have thievery issues, at least it would be a fun prank to pull on a waiter after signing your receipt, or even at the DMV. Yeah, that’s what I’m talking about! Lord knows they could use some humor in their life.