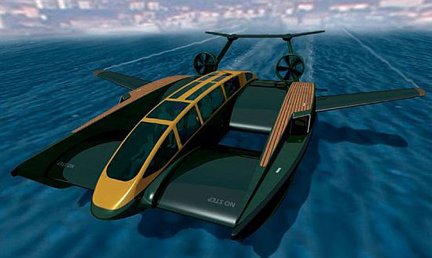 Could it be Thunderbird 7? Well no, but it sure does look like Brains consulted on it’s design. It’s the Focus 21 from France and it can not only sail the seven seas, it can fly over them as well. The Yacht’s design is one of a giant wing with engines – a flying wing for the water.

The Focus 21 France uses the same concept, only incorporating what is essentially a flying wing design to further reduce drag. It The Focus 21 France can hold up to 15 passengers and flies in what aviators call “ground effect,” which is, as wiki puts it, “ the reduction in drag experienced by an aircraft as it approaches a height approximately twice a wingspan’s length off the ground or other level surface.” In other words, the yacht can fly twice as high as it’s wingspan. http://en.wikipedia.org/wiki/Ground_effect_in_aircraft 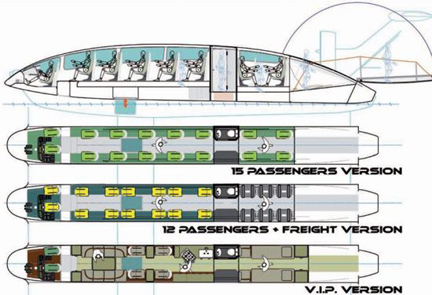 It has a range of approximate 100 km in this configuration and can carry up to 15 passengers.
It’s not the first time this idea has been tried. The Russians created the Ekranoplan (or sea skimmer), and it had the advantage of being able to carry tremendous amounts of cargo – over 100 tons as it skimmed a few meters off the surface at a top speed of nearly 500 miles an hour. That’s the beauty of Ground Effect.

2 thoughts on “Superyacht looks like it belongs to International Rescue”