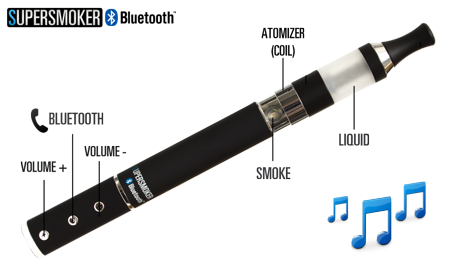 What do you think about the idea concerning electronic cigarettes? Well, the Supersmoker Club has recently introduced an electronic cigarette that will feature Bluetooth functionality integrated within, so that the person who is attempting to wean off tobacco-laden cigarettes will be able to receive incoming calls as well as listen to music – while smoking, that is. I know what you are thinking at the moment – why, I am doing that right now, smoking an actual ciggie (or an electronic cigarette) while my smartphone or Bluetooth headset is activated. What’s the difference? Let us check out what the Supersmoker Bluetooth offers right after the jump.

The Supersmoker Bluetooth has been described to be a revolutionary product which will enable the smokers to experience nicotine free puffs, all the while use the very same device to receive incoming calls and listen to favorite music via Bluetooth. It works this way, there will be a Bluetooth chipset embedded in it, allowing it to hook up to your smartphone or to play music from your predetermined playlist. According to the team of developers who integrated the Bluetooth connectivity into the e-cig, this allows smokers to easily make and receive calls with their e-cig, now how about that? At least it means having one less device to hold in your hand at that point in time.

Below the battery lies a trio of buttons that have their special function each. The middle button will activate the Supersmoker Bluetooth, where upon recognition of the device by a smartphone, they will be paired. Incoming calls will vibrate the e-cig while alerting you with a noise, where you press the middle button to answer the call thanks to the built-in microphone. Apart from that, there will also be volume control buttons integrated within. The Supersmoker Bluetooth is compatible with any Android or iOS-powered device or tablet.