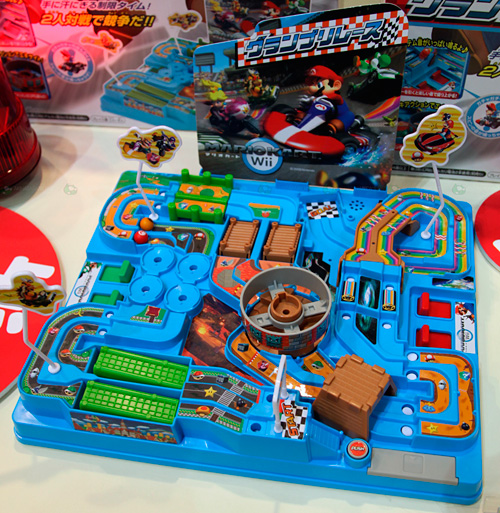 The other day, I discovered something very disturbing about myself and the rest of the world: we are addicted to franchises. Most of the movies this summer have been sequels or movie-versions of concepts with a proven track-record of success. I went and saw The Last Airbender, and even though I enjoyed the film, I realized that I had paid to see a movie that didn’t need to be made, because Avatar:The Last Airbender series was so good.

In the same manner, I can honestly say that we probably don’t need this board game version of Super Mario Kart. After all, there is already a video game of the same name that will give players more of a rush, and the board game looks despairingly unoriginal. I’ve seen games where two players go head-to-head, and have to maneuver marbles across obstacles before. The only difference is that Super Mario Kart version has some authentic sound effects from the video game. Of course, I don’t want to judge it too harshly simply because it is part of a franchise, I haven’t played it for myself.

This board game was created by Epoch, and it was on display at the 2010 Tokyo Toy Show. I would imagine that it will probably be out shortly. Not only that, it will probably make the amount of money that it is projected, maybe even more. This is what happens when you bank on franchises.