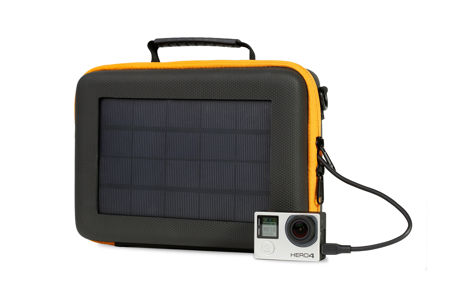 I am quite sure that many hardware manufacturers have long explored the possibility of making their hardware a whole lot more longer lasting than possible, including the battery technology within so that the end user does not need to inconvenience him or herself by making the trek to the nearest power outlet all too often. This has also led to the development of solar chargers, and here we are this time around with SunnyBAG of Austria who has come up with a new Action Case which happens to be an Indiegogo project at the moment – meaning it will need to raise up enough funds in due time in order to be realized.

Just what is the Action Case all about? Well, I am quite sure that most, if not all of us, have heard about GoPro cameras – them tough, rough-and-tumble cameras which have been specially designed in order to go just about anywhere and to record your epic adrenaline pumping adventures. However, the GoPro camera runs on battery, too, which means there might be times when you are stumped because there is no juice available nearby just when you needed to make that last take. Enter SunnyBAG’s Action Case, which was specially designed to deliver protection in addition to its ability to charge a GoPro Action Cam. Of course, other compatible devices are more than welcome to receive a boost of power via the USB port.

The ecologically friendly Action Case is not only weatherproof, it is also solar powered – which means you can bring this with you wherever you are and help power the battery reserves within whenever there is an adequate level of sunlight. The Action Case delivers 3.15 Watts of power which will allow it to fully charge a GoPro camera in under 100 minutes. The case itself measures 9.45” x 6.9” x 2.8”, and will feature a compartment to hold a GoPro Action Cam and a quartet of other compartments that can carry different electronic devices or battery packs, as long as the size is right. Pretty neat idea, don’t you think so?