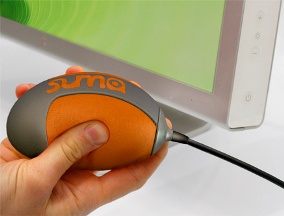 Considering the trend in 3D that has been rising since last January’s CES, it appears that video games are not really doing a good job meeting these needs. After all, you can work Link in the Zelda game with a simple joystick, but that is only because he is generally on land. Yet when the third dimension of flying or swimming gets involved, the game soon becomes more difficult then it should be in real life.

Fortunately, the Wiimote with its motion control helps Link when he is riding a bird or in the water. It’s hard to believe that Cambridge Consultants have created a controller that is even simpler than the Wiimote.

The Suma is a tool that uses the principles of squeezing to create control. I’m not certain how this is supposed to work exactly, but picture a game where you are flying in a spaceship, and you have to use three-dimensional control. Instead of moving a joystick or motion controller, you just squeeze in the proper direction.

Apparently the glove (not an NES Powerglove) is the traditional choice of control for this three-dimensional type of work, but why not use a squeeze ball? After all, squeezing things is one of the first skills a baby learns. One can only hope that adapting to the SUMA control is going to be child’s play.