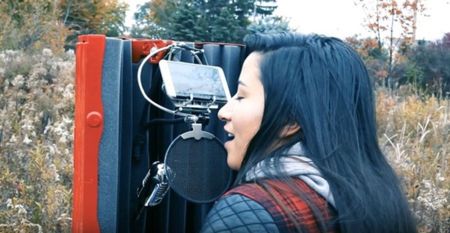 The modern day smartphone is indeed an indispensable tool for anyone and everyone, where it functions as our primary camera, our navigation device, our portable media player, our fitness tracker, and for some, a simple microphone to take down audio notes as and when required. All of these in addition to it being a primary communications device to keep us connected to the rest of the world. However, no one has really tried to turn the smartphone into a portable recording studio, not until now with the introduction of the Studio Stick.

The Studio Stick is touted to be the world’s first portable recording studio for smartphones which will enable users to record high quality songs/audio regardless of where they are, and at a far lower cost compared to renting a professional studio. Being a Kickstarter project, the Studio Stick will first need to raise the necessary amount of funds before it will become reality. The ultimate objective is to democratize the studio recording experience, so that artists can gain access to a professional recording studio without having to blow their budget.

Arriving in a tiny, 20-inch container which can open and expand to an adjustable height, the Studio Stick will feature a microphone, pop filter, mic stand, reflective filter, and phone holder once it is opened. This will then allow artists to be able to record high quality songs just about anywhere and at any time, making it a great tool to have around when inspiration hits. With the Studio Stick app, artists can also record, mix, and master songs, as though they were right smack in a traditional recording studio. Not only that, you can also proceed to sell or purchase beats directly from other users through the apps marketplace, and once the songs are completed, feel free to distribute them to major online retailers such as iTunes, Google Play, and Spotify among others via the Studio Stick App. Place a pre-order for the Studio Stick on Kickstarter now for $274 a pop.