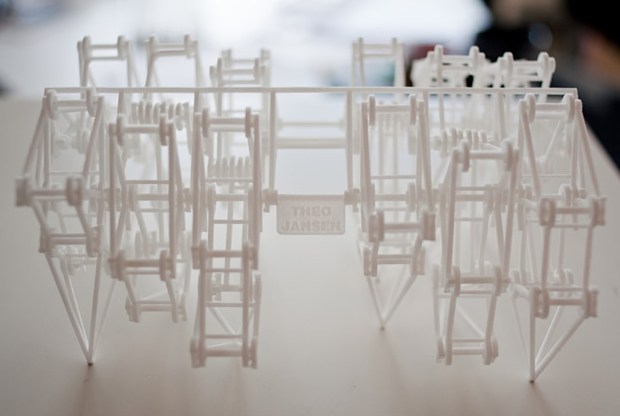 Some of you have never heard of the Strandbeest, which are creations of Theo Jansen. They are kinetic powered sculptures that appear to walk on their own. The last time we mentioned them was last year.
Standbeests can be quite large and are often made of light wood. They sound very difficult to make, but what if it is possible to make these Strandbeests from something as simple as a 3D printer?
Of course, I don’t see anything simple about 3D printing, and it’s not like all of us have a 3D printer like we have a 2D printer. You can see in the video after the jump how a giant blob is made and how it has to be chipped away into what looks like a pre-assembled toy.
So who would want this? Anyone who wants a cool toy, and it shows me another reason why 3D printers need to be cheaper. If I ever had a 3D printer, I suppose the first thing that I would do is make Lego bricks, and then make this particular Strandbeest, because they really are cool.
How cool are they? If George Lucas was still doing stop-and-go models for Star Wars movies, then something tells me the Strandbeests would be attacking a Rebel Base. They would need to have some guns on them, though.