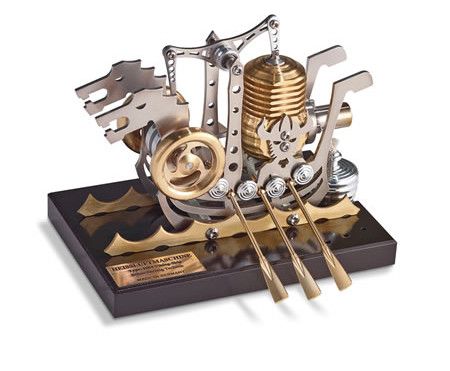 Do you love modern day warfare that is carried out mostly through machines, drones and high powered weapons, so much so that folks on the front lines during a war tend to have a whole lot lower casualties as opposed to two massive armies bearing down on one another in the past. Of course, there were no weapons of mass destruction back then, and navy battles were a whole lot cooler and nail biting as well. Perhaps you might want to roll back the years to enjoy the medieval times with the $399.95 Stirling Engine Viking Longship.

Just what is the Stirling Engine Viking Longship all about? This single-cylinder Stirling engine has been built into the form of a Viking longship, where it is more than capable of puttering up to an efficient 2,500 rpm. The engine itself will be powered by the expansion and compression of air as opposed to slaves or the fury of seafaring Norsemen. This is made possible thanks to the thermodynamic principle of Robert Stirling’s original 1818 regenerative heat engine, and it has been specially made in Germany from machine-tooled solid brass and stainless steel construction. It boasts of a single alcohol burner that rests on a hand-finished birch platform. A full burner of ethyl alcohol should be able to get this engine going for a full 10 minutes.