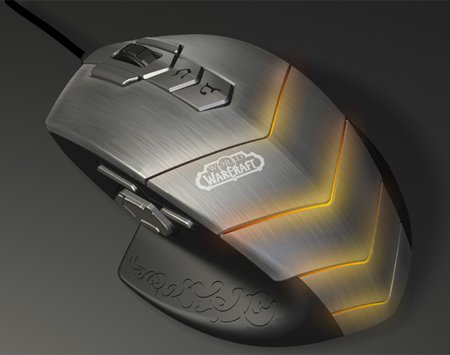 Gaming mice are dime a dozen these days, but that doesn’t mean companies should just stop innovating and come out with new models to tantalize our senses and tempt us to part with our hard earned money, right? SteelSeries shares this sentiment, and over the past few months their engineers have been huddled up in some top secret underground laboratory in order to come up with the new World of Warcraft MMO mouse. Yes, you read that right – a mouse named after one of the most popular MMORPGs on the earth ever. Strange how at the height of Quake’s popularity, you never really come across stuff like a Quake FPS mouse or a StarCraft RTS mouse, but this time we have an MMORPG mouse?! More on this electronic rodent after the jump.

What’s up with this mouse, anyways? Well, one thing’s for sure – World of Warcraft players who are serious about their character will probably lap up just about any tie-in with the game, so expect this SteelSeries World of Warcraft MMO mouse to do OK at the very least in terms of sales figures. Just in time for the Wrath of the Lich King expansion too, I might add. With 15 programmable buttons (that’s three times the number of fingers you have on a hand!) to choose from, you will be able to perform just about all your WoW moves at the click of a button. The inclusion of flashing disco lights are a rather corny touch, although some other people might see it to be appealing instead. The price to pay? $90 a pop, but good thing it looks pretty well built, since those dropping such good money on this peripheral will probably have a pretty empty social calendar anyways in the first place.

Other features include 16 million (!) illumination choices, pre-defined macros, a 2 meter cable, an adjustable CPI range of 800 to 3,000 and a 3.6mm lift distance.