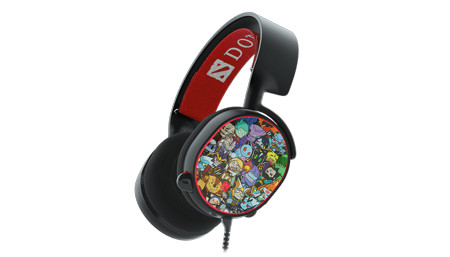 When it comes to gaming peripherals, it is quite safe to assume that the folks over at SteelSeries have gotten it all down pat with a vast array of gaming devices for the masses. In fact, one of their latest releases would be the SteelSeries Arctis 5 Dota 2 Edition gaming headset, where it will boast of special Dota 2 character artwork courtesy of acclaimed Community Contributor, Chroneco. Available as a pre-order at the moment over at Valve’s shop, you can be sure that this will be a limited edition gaming headset since quantities are said to be far and few in between.

Sporting a special Dota 2-themed design on the outside, the Arctis 5 will boast of plenty of performance capabilities underneath the hood. It delivers all of the features that gamers have come to know and love from the Arctis range, where the Arctis 5 Dota 2 Edition is extremely comfortable to wear thanks to the special ski-goggle suspension headband, not to mention having it customized with the Dota 2 logo makes it all the more special. Gamers won’t have to suffer from the ignominy of “hot ears” after a short while of gaming, thanks to the AirWeave ear cushions.