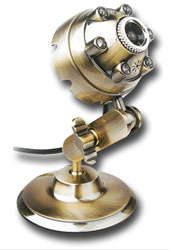 In a time where it’s almost unheard of for people to surf the net on dial-up (except those unfortunate to live out in the middle of nowhere) it’s easy to upload video, and watch your friends on their webcam. Many newer laptops already feature built-in cams, but if you have a desktop and are in the market for a webcam that will stand out a bit, I highly recommend checking out this cool steampunk webcam.

When I first laid my eyes upon this awesome-looking cam, I figured it was a custom mod. However, this is something that’s being mass-produced for you to purchase. There’s not a lot to talk about on the inside, except that it doesn’t require drivers to run. Other than that, it has average specs. 640 x 480 resolution at 30fps and 1.3MP still shots.

While this may look like it’s made from brass or some other metal, that’s just paint on plastic. Still, it doesn’t look half-bad, especially with a price tag of $12. Be wary though, they really nail you with the $26 shipping.