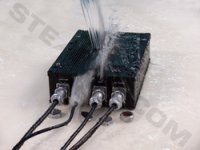 We all know that electrical devices and water don’t make good friends, as whenever they meet, there tends to be flare ups as well as a possible explosive “argument” since both parties aren’t able to see eye-to-eye. Well, computers do fall under the electrical devices category, which is why the WPC-500F from Stealth Computer is different from the rest. After all, their WPC-500F is an industrial rugged machine that is waterproof, coming in a small footprint that does away with built-in fans to keep things cool. It is tough enough to operate in situations where regular computer hardware would have long ago given up the ghost. Definitely worth considering if you want something different in your home, as how many of your mates own a waterproof computer?

According to Stealth Computer, the WPC-500F offers the most environmental protection of any PC to date from the company, where it was specially created to completely sealed on all half dozen sides despite operating in the harshest of environments. This 100% water-tight computing machine is able to handle virtually anything thrown at it, including liquids, chemicals, dust and dirt intrusion, as it meets IP67/NEMA 6 environmental specifications. The internal processor will remain cool without the help of any cooling fans since it relies on advanced heat pipe technology. In addition, the rugged aluminum chassis also doubles up as a heat sink to dissipate internal heat and provide noise free operation.

Just in case you were wondering how small the WPC-500F is, it measures a mere 7.51″ x 11.37″ x 2.97″, and despite being this small, it is somewhat like one of those tiny breed dogs that tend to boast a superior bite compared to larger breeds. In fact, the WPC-500F is powered by the latest Atom processor from Intel, helping it surpass the performance of most other industrial and embedded PCs available today in the market. Prices start from $1,995 upwards when the WPC-500F hits the market later this July, and will go upwards according to the specifications you throw inside.