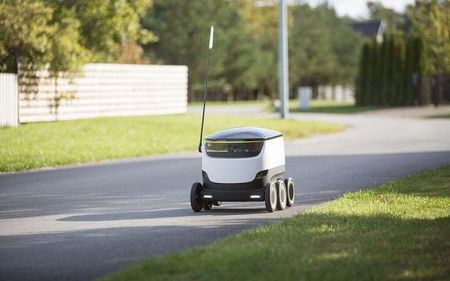 I don’t know about you, but I do enjoy grocery shopping. There is that sense of wonder when a new product is being promoted, not to mention a feeling of satisfaction knowing that you have done your homework beforehand, and the purchases which you made could not be found cheaper anywhere else in town, saving a few dollars here and there which will ultimately add up at the end of the day. Having said that, the one part that I do not enjoy about grocery shopping at all would be the lining up and payment bit, as weekends tend to see the supermarket packed with people. Apart from that, there is the issue of parking and carting all those groceries to your ride. Why not let a robot do that for you? Starship, a new self-driving robot intends to fill this role, as it delivers groceries to your doorstep in less than 30 minutes for £1.

It might surprise you that the Starship robot was developed by Skype co-founders Ahti Heinla and Janus Friis, which is something far removed from a VoIP service. Still, it is nice to know that Starship is ready and waiting in the wings to be deployed, although it will not be able to navigate through uneven terrain and will need a relatively flat route all the way to your home. Starship plods along on pavements at an average speed of 4mph, where it will employ proprietary mapping and navigation technology so that it will avoid crashing into obstacles.

Right now, Starship is being tested as a prototype, and pilot services are planned to roll out in the UK from next year onward. These robots will primarily see action in suburban areas, with one of the first pilot areas being targeted to be Greenwich in East London. Starship has a maximum load of two grocery bags (20lbs), operating out of hubs which are actually repurposed shipping containers that are co-located within grocery stores or warehouses. Starship will return to their hubs between deliveries in order to juice up or be cleaned if necessary.