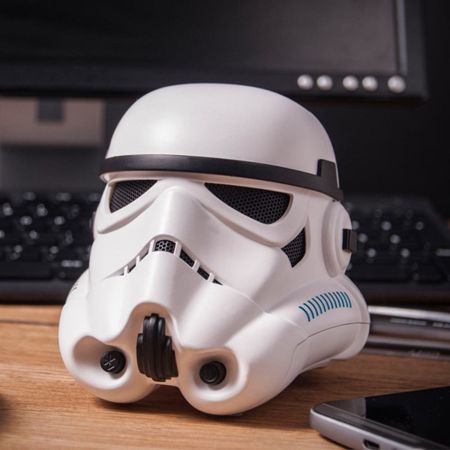 I am quite sure that many of us cannot wait for December to arrive, as that is when the next instalment of the Star Wars franchise will be released, and we get to see the version of a Stormtrooper after the evil Emperor Palpatine was deposed. It is a pity, really, as one might sympathize with Stormtroopers since they might find it difficult to actually find a job in such an economic setting, and have not much choice but to don the white armor. Well, if you think that the Stormtrooper’s helmet design is the bomb, then the £39.99 Star Wars Stormtrooper Speaker would make for the most pleasant purchase.

This wireless speaker will be no ordinary Bluetooth speaker, that is for sure. After all, it is modeled after the classic Stormtrooper design, and you might even be surprised to hear of its performance level that certainly betrays its relatively diminutive form factor. Other than Bluetooth connectivity, there is also a built-in rechargeable 400 mAh lithium battery as well as rubberized feet that will help prevent it from slipping off wherever you decide to place it. Being an officially licensed Star Wars speaker, it boasts of a 3.5mm audio-in-socket as well just in case you have a legacy device that you would want to plug it in with.