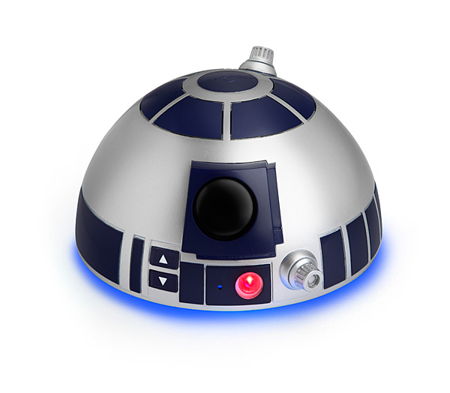 At first glance, it looks as though this is one R2-D2 that has fallen into the hands of Islamic State (IS), taking into consideration how his polished dome has been lopped off its head. After all, beheadings seem to be rather common by the terrorist organization, and I am quite sure that the galactic empire has its fair share of human rights – or rather, droid rights violations as well. Having said that, the $49.99 Star Wars R2-D2 Bluetooth Speakerphone has not been tortured in any way, since it is meant to look like that.

If you are are a Star Wars fan and cannot get enough of the space opera, looking forward to the next instalment of the movie as it happens later next month, then you might as well go nuts with Star Wars merch from now on. The Star Wars R2-D2 Bluetooth Speakerphone happens to be a ThinkGeek creation and exclusive, but unfortunately for the rest of the world (meaning those living outside of the US and Canada), it cannot be shipped there no thanks to licensing agreements. Still, what is there to stop your friend from personally bringing it to you as a gift, right? One thing’s for sure, R2-D2’s cash cow has not quite run dry just yet, and he remains an extremely popular subject when it comes to monetizing the sci-fi series. Other than that, the Star Wars R2-D2 Bluetooth Speakerphone is as what its name suggests – a Bluetooth speakerphone.