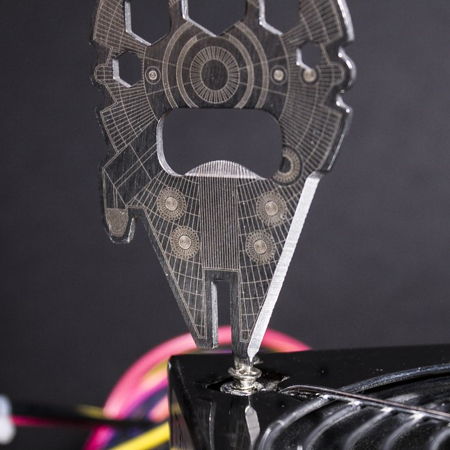 A guy is supposedly more resourceful than a lady, or at least that is the general consensus. After all, guys do all of the heavy lifting, and they are also meant to be able to know how to fix stuff – such as pipes, nuts and bolts, although it seems as though they are unable to fix relationships as well as the ladies. Having said that, here is one ride that has been immortalized since it was shown off on film – the Millennium Falcon that is flown by Han Solo, and the spacecraft has gotten out of some rather tight spots in the past, so it is about to do the same for you in real life as it appears as the £9.99 Millennium Falcon Multi Tool.

She may not look like much, but she does come with all the relevant bits and pieces require to make her great. We are talking about an impressive 11 everyday tools here, where she arrives in an extremely slim form factor that ought to have it fit into just about every and any pocket. As for the kind of tools in which it will sport, those include a screwdriver, earphone tidy, bottle opener, wire stripper, 5 box-end wrenches/ring spanners, ruler and parcel opener. Do bear in mind that this is an officially licensed Star Wars multitool, and it does not come with any kind of secret compartment for smuggling purposes.