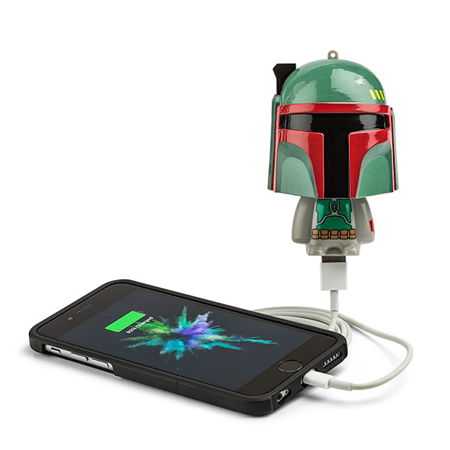 Boba Fett is one of the most feared names in the galaxy when he was still alive before being swallowed by in the Sarlacc Pit. Of course, that was not the end of the famous bounty hunter, but that is a different story for another day. Boba Fett knows how to get around things, especially when he is a tight spot, which makes him a really slick character who is not to be trifled with. Hence, whenever you are in a tight spot yourself where your smartphone or tablet is concerned, why not give it a boost of extra power with the $9.99 Star Wars Mighty Minis Boba Fett?

Being a portable power bank with a Star Wars slant that delivers that extra bit of juice for your phone when you need it most, you can consider this to be a universal tool. After all, it makes use of standard AA batteries, and with that, it is capable of providing up to an additional 3 hours of extra use time, which should be more than sufficient when you need to make just one or two more vital phone calls while you are on the move. This is a ThinkGeek creation and exclusive, and is also an officially licensed Star Wars merchandise. Be sure that rechargeable batteries are not used with this bad boy though.