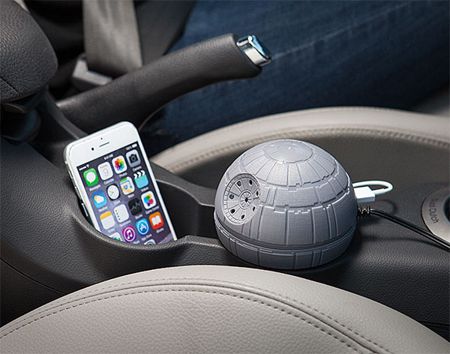 I am quite sure that every single Star Wars fan out there worth his or her salt have already begun to make the necessary and relevant preparations to watch the movie as soon as it hits the silver screen, barring unforeseen circumstances, of course. You might want to deck out your Christmas tree with Star Wars decorations, but when you drive and have gotten tired of the Darth Vader USB Car Charger, why not settle for something more menacing – like the $20.99 Star Wars Death Star USB Car Charger?

Sure, Lord Vader himself mentioned that one ought to not underestimated the power of the Force, but can any Force sensitive being actually pack the kind of power that the Death Star holds, that is, to destroy an entire planet with just a single blast of its laser? I highly doubt it, and best of all is, one does not need to go through years and years of training in the Force to pick up such an ability – just aim the laser at the planet (how hard is it to miss a target that big?), pull a lever or two, and press a button. Even a Stormtrooper in training should be able to do this with his eyes closed. This will play nice with anything that charges via USB, and it sports a pair of USB charging ports.