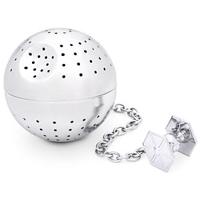 What do you think Emperor Palpatine and Darth Vader do during those afternoons (actually, are there noons when you’re in space? It should be pretty gloomy all the time)? Do they sit down and have a game of chess, or hone their lightsaber skills against one another, get smashed with some extra-terrestrial booze, or simply sip a cup of tea while discussing just which planet the Death Star should blow up next?
Assuming they’re all for afternoon tea with cupcakes and delicious pastry (I still wonder how inconvenient it must be for Vader to eat his meals. Perhaps technology then just pumps nutrients and vitamins into his body), then surely they would have this $19.99 Star Wars Death Star Tea Infuser as part of their kitchen equipment. The tea infuser itself has been molded to resemble the Death Star, where you fill it up with your favorite loose leaf tea, and then plonk it into hot water to let it steep.
This is an officially licensed Lucasfilm collectible, and you just got to love the cute little TIE Fighter that is attached to the Death Star.