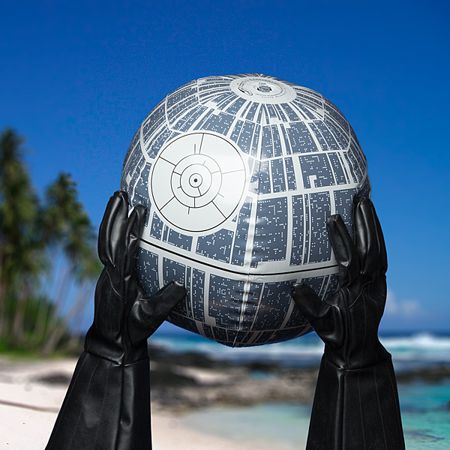 Who would have thought that an engineering flaw would be the downfall of the massive Death Star? Essentially a floating weapon that makes its way through space, imagine the amount of energy that is required to move this thing, not to mention come up with the laser ray which can obliterate planets with a single blast! If you would like your imagination to run wild, then you can always go the extra mile with the $9.99 Star Wars Death Star Light Up Inflatable Ball.

Bring this with you the next time you head out to the beach – as you can then say, that’s no moon, it is a beach ball! What makes this unique purchase so special is the fact that it is impact-activated, meaning, the LED lights on it will turn on the moment it detects and impact. Thankfully, it ships deflated, and you would not have to incur the wrath of the Emperor if you were to set this up in double quick time with a wee bit of lung power involved. This is an officially licensed Star Wars merchandise, and the batteries comprise of non-replaceable button cell batteries, which means once it runs out of juice, that’s that – darkness for everyone working within, but heck, at least it still functions as a beach ball!