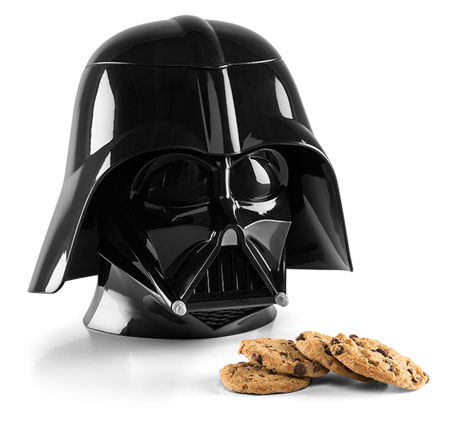 If there is one particularly imposing image of a bad guy in film history, no doubt Darth Vader would rank rather high on the list. After all, the Dark Lord of the Sith had a promising Jedi career until he decided to screw it up due to youthful exuberance, having lost his limbs along the way and much of his potency in the force, ending up as a pupil to his master, the Emperor Palpatine, prior to redeeming himself at the end. His booming voice and heavy,mechanical breathing are his signature traits, but I do not think that either one will keep prying hands and hungry tummies away from the $39.99 Star Wars Darth Vader Talking Cookie Jar.

Basically, the Darth Vader Talking Cookie Jar is as what its name suggests, being a cookie jar that has been shaped like the helmet of your favorite Sith Lord. In order to add to the overall level of authenticity, it will even play the sound of Vader’s breathing from the original trilogy, and if that does not excite you, perhaps you are not a true blue Star Wars fan. Of course, when Vader goes silent one of these days, that is because all three of its LR44 1.5v button cell batteries have called it quits. Thankfully, they are replaceable – just like any Sith apprentice.