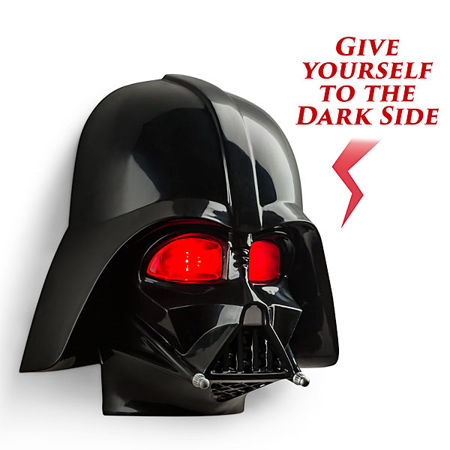 Darth Vader, who is also known as the Dark Lord of the Sith, has made many an appearance where being a lighting accessory is concerned, including that of the LEGO Darth Vader Torch Light. This time around, it will not be his entire body that is more machine than man, since it will just be his head. Yes sir, you got that right – his head. All in all, the $29.99 Star Wars Darth Vader Light and Sound Wall Decor happens to be a wall-mounted, battery-powered Star Wars light that should keep Star Wars fans sated for now, until the movie is released at the end of this year, that is.

Darth Vader will provide an adequate amount of light through his eyes which will light up in – red, of course. Did you think that he would have settled for any other color that befits his menacing Sith self? Not only that, this is not a dummy light, since you can choose to have him cycle through three different phrases, complete with his signature breathing in between each that is still guaranteed to send tingles down the spine of even the most seasoned Star Wars fan. Since it is battery powered by a trio of AA batteries, you can place him just about anywhere – save for the outdoors, that is.