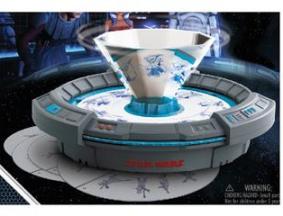 Sure, I still love Star Wars toys, and this one is more of a Clone Wars related toy. The Star Wars “Holographic” Animation Lab isn’t exactly one of the cool holographic communicator/viewers from the movie, but it probably is the next best thing.

The Star Wars Holographic Animation Lab uses the technology of a praxinoscope, which is the next step from a zoetrope. I’m sure all have you have seen at least one of these devices in their lifetime.

This toy comes with 10 double-sided animation discs. You can put them in the reader, and, as you can see from the picture, these images can spin and produce animation.

These discs have a blank side so the user can create his or her own animations. Yeah, that does sound like a time-consuming project, and its pretty limited as far as how much animation can be done, probably.

I have also been told that this toy requires no batteries. That’s right, it would appear the the user just spins the thing to get it to work.

You can pre-order the Star Wars Holographic Animation Lab from the Big Bad Toy Store for about $15.99. It should arrive in the 3rd quarter of 2010.