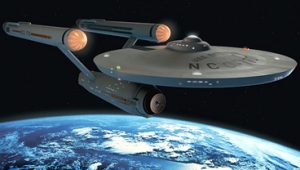 Star Trek fans are definitely going to be pleased that the first 29 episodes of their favorite show are finally available on HD DVD, but they might be upset at a few…changes.

In the tradition of George Lucas, some of the special effects of the original Star Trek episodes have been touched up. Part of it is a redone intro, with a CG Enterprise and planet. Considering it was just a model and a globe back in the sixties, there is no way that the new effects can blend seamlessly.

I wouldn’t think that true Trekkies would appreciate these touch-ups, and as someone who enjoyed watching Star Trek reruns, I never watched it for the special effects. I simply understood that special effects technology was in its infancy, and it was imagination not technology that makes this show timeless.

There are 10 discs in this set. On one side are the episodes in 1080p AVC MPEG-4 HD DVD format, and the other side is the standard DVD format. Of course, film quality was a totally different animal back in the sixties, so I’m not certain how good this will be to look at. The Audio quality might be something with its release in Dolby True HD 5.1 and Dolby Digital Plus 2.0. However, fans might not like the newly re-recorded theme song as far as sound is concerned.