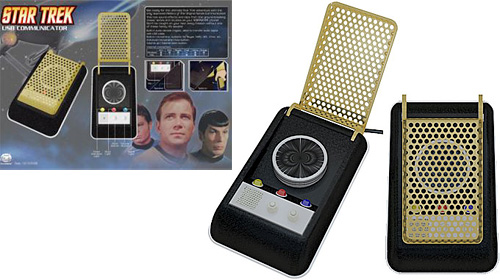 A few years back, an upstart cell phone company announced the holy grail for geeks to great fanfare … a cellphone that looked like a Star Trek Communicator. Everyone signed up to get word of when this cool homage to sci-fi geekery would ship and it was destined to be a very popular product. I mean, who wouldn’t want to indulge in a little “beam me up Scotty” fantasy while making a call to work? But alas, it wasn’t to be as a few months later, the company announced they couldn’t make it work, nor would Paramount/Viacom play ball if they did. Ready for round two? Only this time, it’s a VoIP/Skype platform that has the eye of Captain Kirk’s favorite method communication. Will geeks finally get their due? Or is it just another interstellar carrot on a stick?

The company announcing the deal is a small computer gadget company called “Dream Cheeky,” and the phone itself, sadly, will be tethered to your PC as it’s a USB VoIP Phone which will plug in to any PC and work on any OS be it XP, Vista or OS X. The Communicator comes with speakerphone, volume and mute control, and, of course, the obligatory sound effects and cool lines of dialogue which add to the fantasy.

No word on pricing, just yet, but it should be out sometime in April. Yeah, we’ve heard that before.