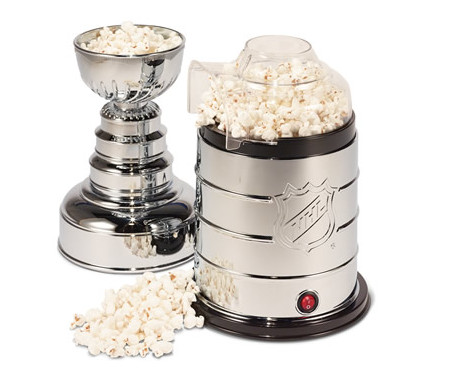 Update: Apologies all for the sacrilegious nature of the earlier version of this story. I have edited it to reflect the true nature of the Stanley Cup.

There is going to be much pride associated with this particular popcorn maker if you were to bring it home with you. After all, we are talking about the legendary Stanley Cup, which so happens to carry the distinction of being the oldest professional sports trophy in North America. The National Hockey League (NHL) is one of the major professional sports leagues in the U.S. and Canada, which adds to its prestige, making this officially licensed $99.95 Stanley Cup Popcorn Maker to be just the right purchase for hardcore hockey fans in your family – or at least those whom you know in your work circle.

The Stanley Cup Popcorn Maker happens to enable one to carry it overhead in a triumphant manner, or perhaps seal it with a case in order to celebrate an extremely successful playoff run. This unique looking popcorn maker will feature the iconic eight-band chalice design, a reflective exterior for that added touch of authenticity, as well as a deep bowl which has been traditionally reserved for champagne, although this time around, this particular Stanley Cup Popcorn Maker will be a hot air popper in disguise, capable of churning out up to 10 cups of popcorn in a matter of five minutes – all sans oil!