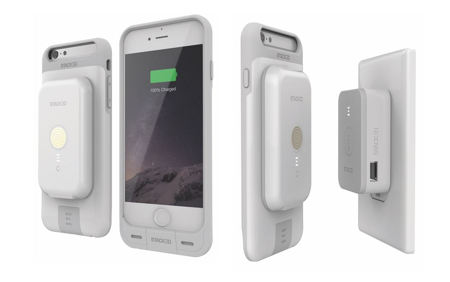 Living the wireless lifestyle is definitely something that many of us aspire to – we would like, as much as possible, to remain free from being tethered to a particular power plug or port as and when required. However, technology has not advanced to such a level just yet, so we will have to make do with pockets of wireless charging here and there. Stacked happens to be a consumer electronics and design company that intends to push the evolutionary envelope a little bit further as it persuades consumers to take the plunge and dive headlong into wireless charging, which is why they have come up with the Stack Pack.

The Stack Pack is special in a sense that this is touted to be the first truly wireless charging ecosystem for the iPhone 6/6s as well as the 6 Plus/6s Plus. The ecosystem will comprise of a case, a Power Pack and the AC wireless wall-charging plug, which will go a long way in solving the modern day issue of being tethered to a pesky wire that might just trip you up – and most definitely cram your style.

Stacked does away with the need for cords from the lives of iPhone users, and with Stacked, you no longer need to experience the feeling of sifting through a bag, or to look under a desk, or to stand right beside a wall simply because your handset is connected to the charger there. Stacked also claims to be able to charge faster compared to any other technology out there, simply because it will be in direct contact with the handset, and it would be the Power Pack alone that needs to be recharged, and not the handset itself. The Power Pack will be juiced up via the included AC wall adapter, enabling up to five Power Packs to be charged simultaneously. The Stack Pack made for iPhone 6/6s and 6 Plus/6s Plus will retail for $129.99 a pop as it arrives in white, black and gold shades.