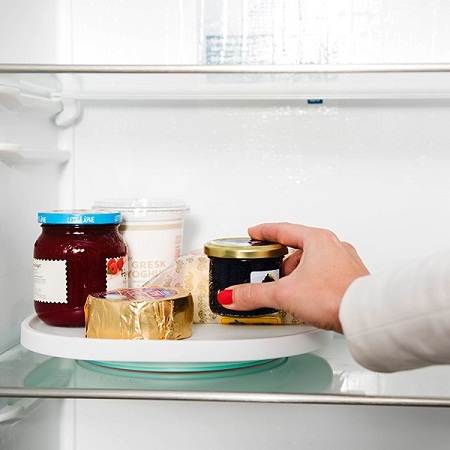 While we don’t mean to, there are always a few groceries in the fridge that we forget about. It might be a week or two after it should have been used that we find it, but normally it just got shoved in the back of the fridge and fades from memory. It’s not that we don’t want to eat it, we just don’t see it as it’s not as readily accessible as everything that’s sitting in front of it.

Instead of having everything sitting flat on the shelf, why not get a Squircle? This is a rotating tray that will make it easier to get hold of any food items that would otherwise be sitting near the back of the fridge. As the name suggests, this is a half square, half circle that is small enough to go in a studio apartment-sized refrigerator. This will not only help you on the organizational side of things, but it can also be taken out and used as a serving tray.

This can only be hand-washed, so don’t try putting it in the dishwasher. This will cost you $24.95, which is a little on the pricey side seeing that it’s a plastic Lazy Susan. Of course, this does have a non-slip base so bottles won’t slide all over the place, but there’s no telling how strong this thing is. There’s always going to be someone who tries to put an entire ham and a gallon of milk on this thing thinking it will have enough structural integrity not to break…and be wrong.

Available for purchase on Unikia