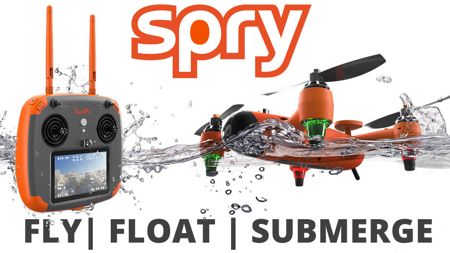 Most of us would know that drones fly and take some rather great looking shots, if you are skilled enough, that is. Then again, there is this thing known as underwater drones which work great in capturing images and videos while you are busy diving or snorkeling, so what happens when you bring two and two together? The answer hails from the team at SwellProUSA and Urban Drones in the form of the Spry. The Spry is touted to be the first ever waterproof drone that is able to submerge like a submarine (albeit briefly), float like a boat, and more importantly, fly in the air at speeds in excess of 43mph.

You will find that the Spry is no slouch in terms of performance, where it comes with a self-contained 4K camera which is able to capture video at 30 frames per second, still images at 12 megapixels, and all the while transmitting the video signal to a monitor that has been embedded in its waterproof remote control. The waterproof remote control itself is also another first-ever accomplishment where the drone industry is concerned.

Such a unique ability to be amphibious in nature makes the Spry one of the most versatile drones to have ever rolled out, something which remained in the realm of science fiction all this while. Owners of the Spry can activate the Spry’s GPS from the remote control in order to access its advanced flight features such as Hold Position, Auto Follow, Object Orbit and Return to Pilot’s Position.

Bringing together the strengths of a fast racing quadcopter and a photography/videography drone, merged into the form of a compact yet durable design, the Spry will let you capture precious memories from unique angles without compromising on speed and agility. You can even turn off the GPS to pilot the Spry completely freestyle, and view what the Spry sees via the live video feed on the remote control’s 4.3-inch monitor. Available for pre-order now at a discounted price of $749, the Spry is definitely something that is worth checking out.