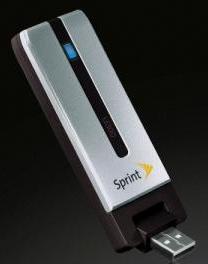 Yesterday, Sprint announced that it will launch a dual-mode 3G/4G wireless broadband modem specifically designed for laptops. This device, known as the Sprint 3G/4G USB Modem U300, is designed to plug right in the USB port for quick Internet access.

The U300 is able to access Sprint’s 3G cellular data network and the new WiMax wireless network that Sprint is building as part of their new Clearwire program. This 4G program will allow download speeds between 2 Mbps and 4 Mpbs.

The 4G network has only been recently launched in the Baltimore area, but it has been slow to catch on. With any luck, 4G should be in place in every major city by the end of 2009. If a user should be out of range of the 4G network, it will automatically go to the 3G, which has download speeds of 600 Kbps to 1.4 Mbps.

The U300 should be available on Sunday, and costs about $149.99 after a $50 mail-in rebate. As for the new 3G and 4G combination plan, that will probably cost about $79.99 in monthly fees. Some of you might find that high, but it is a small price to pay for being able to have Internet access wherever you go.