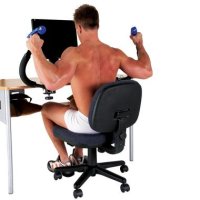 The latest media statistics show that “four in five of all U.S. adults—or an estimated 178 million people—go online”, and the local TV news station has also stated that there is a new wave among teenagers, where driving-aged teens are delaying their license application and driving lessons just because they want to remain connected to their friends through the virtual world as well as blog online. Further data from the IDC shows that “the average internet user spends 32.7 hours per week on the internet”. Average that out and you get 4.67 hours a day, so you can imagine just how many hours a blogger spends in front of that radiation emitting screen. All the time spent sitting in front of the computer does not bode well for the human body, mainly because of the lack of exercise and poor posture that seems to be a problem for most people, which will result in carpal tunnel syndrome eventually. Enter the Springflex UB device.

The Springflex UB offers way more freedom to perform various exercise routines in order to avoid picking up a variety of repetitive strain injuries (RSI), as it helps you move around much more often that you normally do in addition to lowering the dangers of sedentary computer use, lowered metabolism and weight gain. This is because with the Springflex attached to your desk, you will be able to perform your workout right there and then without packing your bags and heading off to the local gym.

There are over 120 exercises that can be performed with the Springflex UB in order for you to further tone and firm your upper body. Too bad there is no add on for the lower body, but hey – women love nothing but a nice, large pair of biceps as well as drooling over those pecs. Guess reading Coolest Gadgets won’t be such a fattening experience any more, is it? I just wonder what your colleagues have to say about this – unless it is an office-wide policy to install the Springflex UB in each and every single desk, chances are the majority won’t want such a distraction, especially if you tend to carry around a strong BO where a whiff of it is enough to send the nearest skunk packing, tail between its legs.