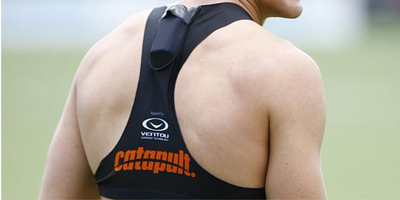 How to athletes keep getting better? Just when we think an athletic feat is unsurmountable, a record is broken. Hits, runs, pitches (the throws…not the grass), bats, bowls, tackles, speeds, heights, goals, assists…the quantities and speeds continue to reach new records. Ever wonder how they keep improving what we believe cannot be improved? Sure, advancements in diet, exercise, training, video and scouting have revolutionized the athlete’s life. But in our ever-growing age of technology you can guarantee the tech involvement in enhancing athletic performance is high. One Australian company has been and continues revolutionizing how technology and human performance collide and advance.

advancements of future, the AIS began to deep dive with Holthouse and van de Griendt on athlete performance. Realizing that performance was always different in competition than in training, the ‘wearability’ factor of sensors became crucial to capturing data so as to analyze an athlete’s performance when exerting themselves at high levels.  Their wearable innovations led them to success for the Australian Olympic teams in the early 2000.  Soon after this success, Catapult was founded in 2006.
Catapult systems are ultimately designed to evaluate athlete’s power and efficiency through a number of measurements and give users the ability to easily analyze the data. Teams, clubs and individuals can use GPS-based outdoor tracking or a multilateration indoor system with ‘portable satellites’. All motions, actions, speeds and reactions can be tracked. Their IMA (Inertial Movement Analysis) enables athlete’s performance to be accurate to their own abilities too, factoring out the impact of the force of gravity. And their Openfield platform means the days of crunching performance numbers are gone. An easy to use interface means each coach, trainer or athlete can analyze performance in the way they choose.

To this day the wearable technology produced by Catapult rank them as a global leader. Their client base ranges from big name clubs in the NFL (Dallas Cowboys), NBA (San Antonio Spurs), Football/Soccer (Newcastle United, US Men’s National Team), Rugby (Saracens) and many many more. Global media has responded too, with ESPN calling it one of the best sports innovations since 1998. Visit their website to learn more.

So what does this mean for the average person? Well, rest assured that our favorite teams now have another weapon in their quest to win divisions, leagues and championships. And who knows, maybe these wearable technologies will make it to the consumer side in the future, to help us weekend warriors.