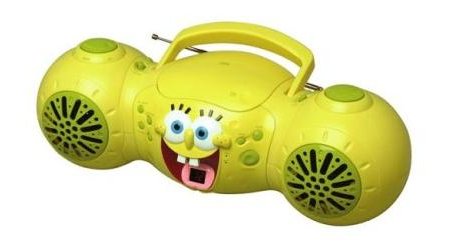 SpongeBob Squarepants is truly a one-of-a-kind cartoon character – either you like him or you don’t. There is no fence-sitting with this little piece of nerdy-looking sponge, but you surely cannot deny his popularity among the legion of kids hooked on Nickelodeon. What better way to ring up the cash registers by introducing a radio that comes in the form of SpongeBob Squarepants? After all, kids these days are smart enough to start drawing up their Christmas list in the summer so that they get the best presents possible when December rolls around.

Not only does SpongeBob SquarePants tune in to the radio, it also comes with a CD player located near his head that works with regular audio CDs, CD-Rs, and CD-RW discs as well. Kids will probably beg their parents to get this, but if you’re tight on money (he costs $45), you’d better think twice as outgrowing such a character won’t take too long. Goodbye SpongeBob, hello Transformers.