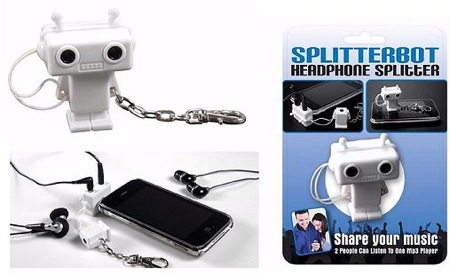 Even tiny robots can be extremely useful and this is one of them, not to mention he’s incredibly cute too.  Not so cute that no man would be ashamed of carrying him around though, which is a difficult balance to walk.  However, robots can usually get away with looking just a little on the cute side, while still being considered awesome.  The tiny white robot doesn’t do a whole lot, but he will help you share your music with one other person.  That is, instead of carrying portable speakers and forcing everyone around you to listen in.

To work the little guy you just plug in your MP3 player into the robot.  Then you can plug in two different sets of headphones into him as well.  It’s pretty basic stuff.  Plus he has a small keychain attached to him, so if you wanted to you could keep him on your keys.  That way when he’s needed he’s already easily within reach.  You can purchase him for about A$19.60, which converts into about $16, plus whatever it would cost to get it shipped to the US or UK.