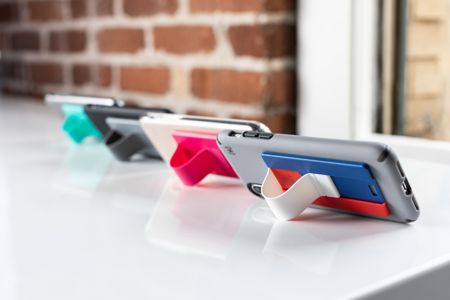 Speck has churned out accessories for mobile devices for quite some time now, and most of them are limited to smartphone and tablet cases that offer protection accompanied by style. This time around, Speck has revealed their all-new super slim grip assist accessory known as the GrabTab. The GrabTab was specially designed in order to deliver a secure hold on devices regardless of their size, without having it impede any of the other functions of the smartphone it is attached to. Sporting a comfortable holding loop, this holding loop has dual functionality since it also doubles up as a convenient phone stand for on-the-go entertainment.

A normal grip assist accessory is common and extremely affordable, but its major drawback would be having additional bulk on a device. This in turn makes it difficult to pull the device in and out of a pocket or other small spaces such as a handbag. Apart from that, many times the standard issue grip accessory would get in the way of Qi wireless charging capabilities, which would then turn such a popular and important device feature redundant. The GrabTab solves both of these challenges by the simple fact that it is credit card-sized while measuring a mere 3mm thin, helping to maintain the sleek body of today’s modern handsets while ensuring the continuity of full compatibility with wireless charging.

Installing and using the GrabTab is a snap. This particular accessory will adhere firmly to the back of the device’s case, where the flexible strip manually slides up in order to lock into place so that it can create a finger-sized loop which is comfortable and easy to grip. When engaged, the GrabTab provides a comfortable and secure hold each time you are on the move, snapping selfies, sending text messages or updating your social media profile, among others. The loop also functions as a stand which can prop the device on its side, coming in handy when you need to watch videos, read the news or simply carrying out a video chat with friends.

Such a universal design allows the GrabTab to work with most smartphone cases and devices. With an asking price of just $9.95 apiece, this is certainly an extremely affordable accessory that anyone can pick up to be more productive on the move.