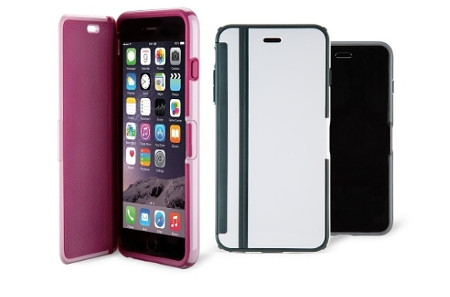 When it comes to cases for your smartphone, it can be quite a difficult decision to make. There are times when you realize that putting on a smartphone case would mean not respecting the kind of design work that had gone in to make your smartphone look as good as possible, but on the other hand, a protective case does what it is meant to do – to ensure that your device remains relatively unscathed from everyday brushes, accidental knocks and drops. In fact, this particular market can be said to be extremely lucrative, otherwise how else can one explain the massive number of different protective case models out there? Speck might have something for you to deck out your iPhone with which will be different from the other kinds in the market – the CandyShell Wrap.

The CandyShell Wrap from Speck happens to come in the form of a durable folio case that features a patented dual-layer design that will wrap the iPhone in 360 degrees of protection. CandyShell Wrap is no ordinary design, since it has been deemed to be a design milestone for Speck, who engineered the all-around, dual-layer construction in order for it to exceed military-grade protection standards, all without adding too much bulk. In fact, the CandyShell Wrap is said to add just an additional 0.24” in terms of thickness to the smartphone, now how about that?

The CandyShell Wrap has been specially created to target the growing number of smartphone users who are on the lookout for a case that incorporates a protective cover for the screen. In fact, it will extend Speck’s patented CandyShell design to a new, full coverage, 360° protective case using an innovative flip cover. This clever design will also “solve” the issues that plague many of the folio cases on the market today, where a rubber hinge allows for easy one-handed use, and doesn’t cover up the camera when it’s folded back. There is also a locking latch that ensures the cover remains on tightly so that hard or sharp items are unable to prise the cover and glass apart, causing damage along the way. Those who are interested can pick up the CandyShell Wrap for the iPhone 6 and iPhone 6 Plus for $49.95 and $59.95, respectively.