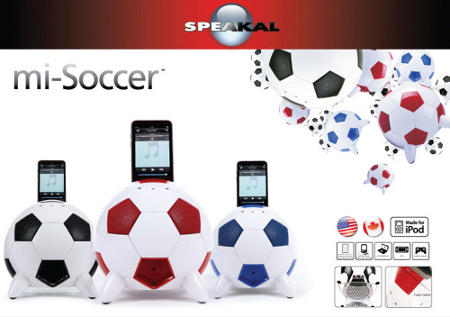 You know that a particular market is extremely lucrative when there are tons of competition out there, case in point speaker systems as well as docking stations for the iPod family, all jostling for a slice of the financial pie assuming their product makes it to the best selling list. Speakal has such similar dreams of their own as well, having recently rolled out their latest addition from its family of High Fidelity Audio Speakers and iPod Docking stations, known as the miSoccer speaker system. Talk about a speaker system that has a kick of its own – it will also make a great gift idea for those who are absolutely nuts about soccer as the World Cup Finals will be held in South Africa next summer.

Despite looking as though it is some kid’s toy, the miSoccer doesn’t really compromise when it comes to performance, offering 23+ watts of high quality sound via a 15 watt subwoofer and two multi-way speakers. This ought to be enough to keep a small living room thumping with your favorite tunes, without running the risk of your neighbors complaining to the police to turn it down. You will also be pleasantly surprised to know that the miSoccer is compatible with all of the iPods as long as they have a dock connector. Other features include Humanized Touch Control, a remote control which can manage sound and its quality alongside controlling the docked iPod.

The miSoccer speaker system from Speakal retails for $119.99 a pop, although we do wish that something could be done about the external design as it looks rather cheap and plasticky despite paying more than a Benjamin for it. At least the spherical design does offer the strategic placement of speakers to produce a true 360° sound distribution – how about that for saving grace?