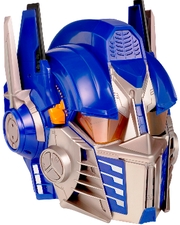 Remember the Transformers cartoon that was all the rage over a decade ago? I always knew that the idea of intelligent robots who could transform into totally cool rides was a good one, and thankfully the world of movies has finally caught up in terms of technology to produce some really stunning visual effects that is capable of doing this beloved franchise justice at long last. Hasbro will be bringing a helmet of the straight as a ruler Optimus Prime, leader of the goody two shoes Autobots faction.

This helmet will automatically turn whatever you say in the same voice as Optimus Prime himself, lending you some authority for those with less manly voices. I’m not too sure how well this helmet works with a female voice, but we can only find out when the product is released in conjunction with the movie’s debut this summer. Of course, a simulated voice isn’t the only thing this helmet can do as it comes with a couple of other modes to keep you amused – Battle Phrases and Conversion Sounds. It would be cool if there was a Megatron release to balance up the good with some old fashioned evil, so keep your fingers crossed.

In addition, Hasbro will be bringing us the Optimus Prime Battle Rig. This ordinary looking truck can transform into a foam dart firing blaster in the blink of an eye to catch those pesky Decepticons offguard. Transformers fans look set to have a field day this year when the full range of merchandise is released by Hasbro. There should be no better time than now to start saving.