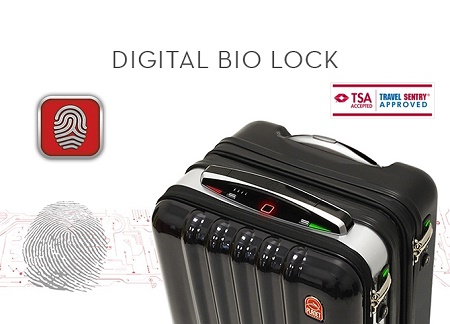 When you’re constantly hopping on and off of a plane, having a run-of-the-mill suitcase is not going to cut it. Two wheels locked into going only one direction will wobble and fall over, a cloth case means everything inside will be squished, and a cheap handle leads to a broken handle sooner than you were expecting. While a hard-shelled suitcase with wheels capable of a 360 are the easiest to maneuver while keeping your stuff safe, there are other suitcases that take their job far more seriously.

We’ve seen some connected suitcases in the past, but as it is with most things in the ever-advancing technology market, something better was bound to come along. The Space Case 1 is looking like the most high-tech luggage we’ve seen thus far. It uses a fingerprint scanner to open the polycarbonate case, has a global tracker, a self scale built into the base so you don’t need to pick it up for weight purposes, a built-in power bank, anti-theft proximity sensor, and a Bluetooth speakerphone for taking calls.

Rather unsurprisingly, this works in conjunction with a smartphone app, which is where you will see the weight of your suitcase, can use the biometric scanner and tell where your luggage is on a map. There are two USB ports for the 12,000 mAh battery so you can charge up your both your phone and tablet simultaneously, or help out a fellow traveler. There is a space for laptops that measure up to 15.6″ and other electronics for ease of accessibility. For the clothing compartment there is also a garment bag pocket to keep your clothes wrinkle-free while in transit. You’ll get 10 years of cloud protection, but who knows what’s going to come out in the next year or two, let alone ten. This is going to cost you $279 and up through a crowdfunding campaign, but the retail is expected to be far higher.