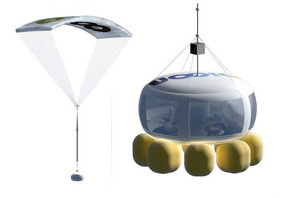 Now that the Space Shuttle program has been essentially grounded, it is time to start thinking of new ways to leave the atmosphere.
Virgin Galactic may be banking on expensive trips with space planes, but this is the first time that I have heard of traveling to space via balloon.
This lighter-than-air spacecraft, the Bloon, will reach 22 miles (36 kilometers) into space. That is enough to see the curvature of the Earth, but not enough to float the passengers with zero gravity. Check out the video after the jump to see what it might look like.
The balloon is the creation of company zero2infinity, and it only can stay in space for only a few minutes. From there, it lightly parachutes to the Earth, and you have a great story to tell.
The idea of traveling above the atmosphere in a balloon is not new, as it was the first balloonists who were able to actually see that the Earth was round. Too bad we can’t travel to the moon on a balloon like in The Adventures of Baron Munchhausen.
As it turns out, we might be seeing the Bloon ready to take off by the year 2015. The cost of the flight is pretty up there at $156,000 per seat, and I wonder who will pay for this type of flight.