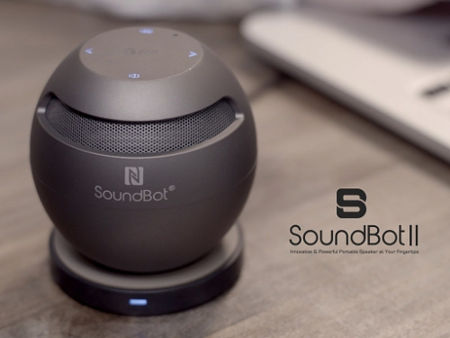 The SoundBot II will definitely appeal to those out there who love living an untethered lifestyle as far as possible. After all, cables happen to be a relic of the past, isnt’ it? Well, The SoundBot II happens to be a revolutionary wireless Bluetooth portable audio speaker from SoundBot (hence the rather obvious name), where it will now raise the bar for multi-media Bluetooth speakers in the market thanks to the inclusion of Qi standard wireless charging capability.

The team that designed the SoundBot II happen to be based in the City of Industry, California, and they happen to have a glimpse of what the future would look like where wireless charging for portable speakers is concerned. SoundBot II happens to be universally compatible with the current Qi chargers that are in the market, and it does not matter if one is referring to the newest Samsung Qi standard charger which are being blasted out on TV commercials, or a new Qi-enabled piece of furniture from IKEA, a Qi equipped Audi luxury car, a Nokia charging pad that was manufactured years ago, or a Google Nexus smartphone inductive charger – all of them will play nice with the SoundBot II.

SoundBot’s ultimate goal? To develop a series of Qi compatible devices which can fully realize the benefits the technology offers. Right now, SoundBot II has been launched on Kickstarter, where they are looking for music lovers from all four corners of the world to offer their support. At the end of the day, if the SoundBot II were to be realized and roll off production lines in the flesh because it has picked up enough support along the way (and then some), you will be pleased to know that those Super Early Bird backers will be able to enjoy international and domestic free shipping. Anyone interested?