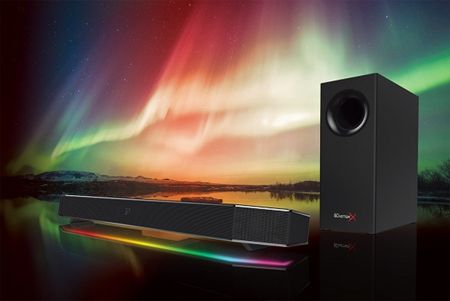 When it comes to audio peripherals that work well with a computer, you know that you will not be able to go wrong with the Sound Blaster name. That name has certainly come a long way since its early days of churning out 8-bit sound cards that fit into an ISA slot back in the days when games on PCs ran on EMS or XMS, with MS-DOS as the operating system. Fast forward to today, and Sound Blaster does a whole lot more than just soundcards — in fact, they have for a long time now, jumped into the lucrative speaker market. Their latest generation speakers for gamers would be the Sound BlasterX Katana gaming speakers.

We would like to think that once you have the Sound BlasterX Katana gaming speakers, there is no more need to upgrade, perhaps not for a few more years. This would be an all-in-one 24-bit under-monitor audio system that delivers a whopping 150W of peak power, how does that sound (pun not intended) to your ears?

What makes the Sound BlasterX Katana so special actually ? Touted to be the very first of its kind, it has an Under-Monitor Audio System which will be accompanied by Creative’s most powerful multi-core audio DSP to date, allowing it to function as a high-end Sound Blaster sound card/DAC which can project 24-bit high-resolution audio for lossless, crystal-clear and impressive room-filling sound. Thanks to a future-forward tri-amplified design which will power 5-drivers that comprise of 2 up-firing midbass drivers, a pair of high-excursion tweeters, and a long-throw subwoofer, each of them will be individually powered by a DSP-controlled amplifier in order for gamers to enjoy precise audio reproduction at each part of the audio spectrum.

The BlasterX Acoustic Engine and a Dolby Digital 5.1 decoder are also part of the eal, providing users with immersive audio for both games and movies. The entire audio system is aesthetically pleasing, being crafted with brushed aluminium, while it boasts of a programmable Aurora Reactive lighting system with 16.8 million colors.

The Sound BlasterX Katana will be out later this week on 22 November 2016, with a $299.99 price point. Will we see an instant price slash when Black Friday comes around?