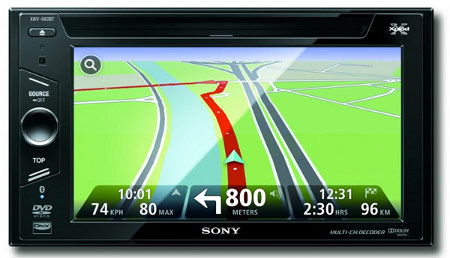 Both Sony and TomTom have come together to roll out a couple of A/V navigation systems in the form of the XNV-770BT and XNV-660BT, where both companies hope that this partnership will result in some of the most advanced car audio, video and navigational technologies which are currently available in the current market. The Sony XNV-770BT will be a 7-inch widescreen display while the XNV-660BT is a 6.1-inch widescreen display, where both models will ship pre-loaded with TomTom’s extensive map database of both US and Canada roads, coupled with one free year of map upgrades which does not involve any incremental charge. Just to get an idea on how comprehensive TomTom’s maps in the US are, they feature more than 1 million more miles of roads than other GPS brands. Ain’t that comforting?

Apart from that, each system is capable of taking full advantage of several of TomTom’s advanced navigational technologies such as :-

Shared features of both devices include a high quality WVGA display that are touted to be one of the brightest and highest contrast screens available at the moment. The XNV-770BT’s 7-inch display is fully capacitive touch sensitive, while the XNV-660BT will feature several hard keys such as volume and key menu buttons to complement its touchscreen display. There is a rear USB port located on both devices for simple hookup to iPod, iPhone and other digital music players, while full Bluetooth capability ensures you can hook up wirelessly to other compatible devices. Sony also threw in a stylish graphical user interface (GUI) that comprises of large, easy-touch buttons to make life easier for everyone.

Audio-wise, you get multi-channel playback with Center Speaker Organizer (CSO), resulting in a virtual 5.1 channel surround sound throughout the car. As for the advanced sound engine (ASE), it will deliver a high-quality, digitally enhanced sound experience while letting you customize the in-car sound field in order to match your tastes. Expect the new XNV-770BT and XNV-660BT A/V navigation systems to be out this November for around $1,300 and $1,000, respectively.