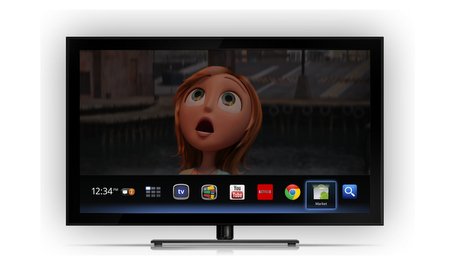 The Google TV platform that delivers a special kind of entertainment experience which can be found on Sony Internet TV, in addition to the Sony Internet TV Blu-ray Disc player. Just what does the latest version of Google TV deliver? For starters, it will not only deliver all that the current Google TV has, it will also throw into the mix the Android Market to satisfy your lust for more apps. At launch, you will be treated to hundreds of apps (which you can all control with your URC), where many of them have been specially designed and optimized for TV use.

This particularly exciting update will roll out to all connected Sony Internet TV devices as early as next week, so do keep a keen eye out if you fall under the “receiver” category.

This update is said to deliver a simpler and cleaner interface, alongside the mandatory “improved performance” which is often associated with any software update. Not only that, Google being Google has also injected this update with better search functionality to all currently installed Sony Internet TV and Sony Internet TV Blu-ray owners. Apart from that, future consumers of Sony Internet TVs and Blu-ray Disc players will also be on the receiving end of the update during the initial start-up installation.
Steve Haber, EVP, Sony Electronics says, “Connected experiences are a pillar of Sony’s value to TV consumers and Sony Internet Television powered by Google TV certainly brings ‘smart’ connectivity to the highest level. We very much look forward to the possibilities the Android Market will create for customers to personalize their experience. Users will enjoy the new features that this update brings to their interactive engagement with home entertainment programming, either through Sony Internet TVs or Bu-ray Disc players.”

That being said, this nothing that you couln’t get yourself for the price of $30, which will get you a decent Android TV box allowing you to access the whole Play store and much more.

During launch, original Sony applications will also sport TrackID that will be able to search and identify music heard on TV broadcasts, packaged media or streaming video. Not only that, Sony Select will also offer a curated collection, where it highlights featured applications to consumers in an easy-to-browse manner.