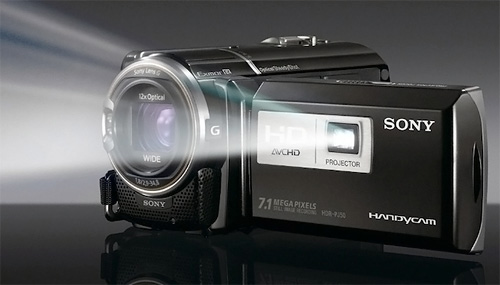 When I saw this pic of the Sony HDR-PJ50, I was not surprised. After all, it isn’t the first time I have seen a projector on a camera. Nikon did this with the Coolpix S1000pj, and 3M did this with Shoot and Share camera as well.
The projector of the HDR-PJ50 is able to project an image of 60-inches on any flat surface, but you are probably going to have to be in a very dark room.
Then there is the usual feature of a 1920 x 1080 HD video and an unusual feature of a built-in 220GB hard drive. As you might have guessed, it is good for memory sticks or SD cards. It also has a built-in 220GB hard drive, so you can catch a lot of video.
Other features include a 12X Optical zoom, and stills that can be captured at 7.1 Megapixels. Audio is captured at Dolby Digital 5.1, and it has a stereo camera mounted microphone.
I’m not certain how successful the Sony HDR-PJ50 will be, as I have heard that the Coolpix S1000pj didn’t do so hot as far as sales are concerned. However, I could be wrong.
I also don’t see any reason why a camera shouldn’t have a projector, but it definitely has to be at a price that consumers can afford. In this case, the HDR-PJ50 is about $1,201.95, which is a little out of my price range.
Source

The best short throw projector is the LG HF65LA. It offers a 30,000-hour lamp life, wireless screen share and Bluetooth audio output which is a great feature to have. It would work great presentations as well as for gaming.