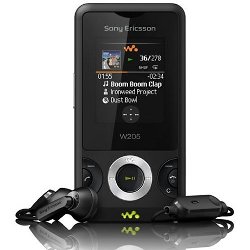 Imagine an alternate timeline, where cellular phone technology has been perfected and cheaply mass-marketed in the early 1980s instead of the late 1990s. In this reality, a cellular phone is built into every Sony Walkman.

Perhaps this would be an era of the Sony Ericsson W205. It would be a time where tracks are played with the album art with ID3 tags on a 1.8 display screen, and TrackID would name the tune and artist would you would play on the included FM radio.

You might be wondering where the numbers for this phone are on this picture. This is a slider with speaker phone and Bluetooth features.

The W205 would also use an Opera browser, with 5 MB of memory and supports up to 2GB of memory expansion with an M2 card. As for the camera, you are looking at a 1.3 megapixel with a 2.2 x digital zoom and video recorder.

Okay, the time for imagining this alternate era is over, and the time to live in the now is here. The Sony Ericsson W205 is expected to hit the market in the second quarter of this year. There is no word on a price, but if it is for the average consumer, expect a low price.