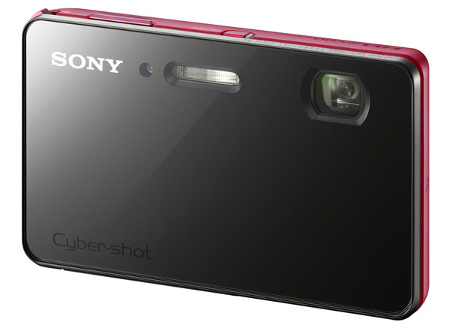 Thin is still in where digital cameras are concerned, and while we took a look at a couple of shooters from Panasonic yesterday, Sony too, did not want to lose out on the game, and the Japanese consumer electronics manufacturer has just added yet another model to the ultra-thin Cyber-shot T series – with the model number DSC-TX200V. You might want to look into expanding that external storage space collection of yours if you happen to pick up the new TX200V camera though, considering it is capable of shooting 18.2-megapixel images thanks to its “Exmor R” CMOS sensor.
This would clearly place the Sony DSC-TX200V as the highest-resolution digital camera that is currently on offer in the “point and shoot” market segment, and when coupled with the spanking new BIONZ processor, both of them will work in tandem to create images as well as video files with extremely low noise.

Just what else do you expect the Sony DSC-TX200V to carry? This advanced model is also tipped to deliver lightning-fast AutoFocus speeds of approximately 0.13 seconds in daytime and 0.25 seconds in low-light situations. Bear in mind that the speeds quoted are just on paper, when in real life, they might vary depending on shooting conditions. With such shooting speeds, they will more or less ensure you are able to capture the right moment at all times.

Not only that, the TX200V Cyber-shot will also look good externally, as it comes with a new and beautiful, reinforced glass design which encases a large, 3.3″ Xtra Fine TruBlack OLED wide touch-screen display. Want to bring this with you on your next watersports adventure? Not to worry – considering this is water-proof (up to 5m or approx.16 feet), and I am quite sure that also, to a certain amount of time.

In addition, the Sony DSC-TX200V is also dust-proof and freeze-proof (up to 14F), and will boast a “Photo Creativity” interface which allows you to easily adjust creative settings in order to roll out unique, custom-styled photos. If you happen to have case of shaky hands, fret not – image stabilization will kick in during video and still shooting, thanks to borrowed technology from the Sony Handycam range, where its “Optical Steady Shot Active Mode” drastically reduces blurring caused by camera shake while on the move.

Expect to pick up the DSC-TX200V camera in silver, red, and violet shades for around $500 when it hits the market later this month.