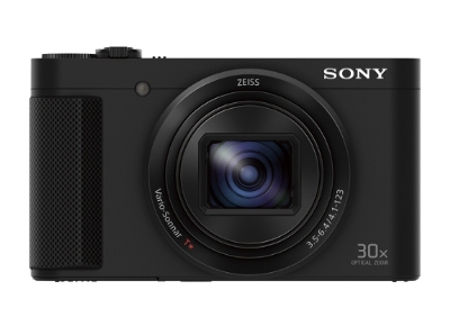 Most of the time when it comes to digital cameras, many people would want to have a heavy and chunky DSLR in their possession for the simple fact that it offers far more controls and is better able to snap photos with greater precision and clarity than a simple point-and-shoot camera. However, it looks like there is also room for another player in the genre, which would be system cameras that do away with the bulk and yet offer impressive image quality. Sony straddles the entry level market here with the Sony DSC-HX80 compact zoom camera.

The Sony DSC-HX80 is said to arrive with a wide range of advanced imaging capabilities, where among them include 30x optical zoom, a high-resolution 18.2 MP2 Exmor R CMOS Sensor and a retractable OLED Tru-Finder in a class-leading compact body. Not only that, the Sony DSC-HX80 also holds the distinction of being the only compact high-zoom camera that will boast of a retractable electronic viewfinder, which makes it an extremely appealing and flexible solution when it comes to traveling and family photography, in addition to video shooting.

The premium 30x ZEISS Vario-Sonnar T optical zoom lens with 60x “Clear Image” digital zoom capability should be more than capable of snapping great looking shots from afar, while the built-in pop-up OLED Tru-Finder EVF with high contrast and vivid colors ought to let you see what you shoot immediately as though you were right in front of it. Throw in Optical SteadyShot with 5-axis image stabilization and you will be able to minimize the effects of camera shake as well.

Other features of the Sony DSC-HX80 include a high-resolution, 921k dot LCD screen that is able to tilt a full 180 degrees for comfortable arms-length portraits, or “selfies” as we call it, and is Wi-Fi / NFC compatible. Those who are interested in picking it up need not have to break the bank as the Sony DSC-HX80 will be available from next month onward for approximately $350 a pop.