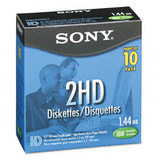 Sony has just announced that they will no longer be making floppy disks anymore.

I suppose this should come as no surprise. Ever since I purchased my A-drive free laptop in 2006, I no longer use floppy disks. In fact, once I sold off my desktop and now have a laptop for every adult in the house, I have a desk drawer full of floppies. Oh man, I hope that I never have to access any of the information on those floppies ever again.

So what about you, readers? When was the last time you even used a floppy disk? Or do you just use flash drives or memory cards now?

It would appear that floppy disks are now joining the dead format club of LPs, cassettes, laser discs, reel-to-reel, 8-tracks, VHS, and Betamax. Granted, they still sell those products somewhere, but they don’t have near the high life in the heyday.

By the way, Sony sold 12 million floppy discs in Japan alone. I’m guessing that number isn’t enough to turn a profit, or else they wouldn’t be terminating this format.

Here are media formats that I believe are next to go:

1) Music CDs. Considering iTunes and other digital formats to play on our MP3 players are the music of choice these days, how long will it be before these will be completely non-existent?

2) DVDs. If Blu-ray is the going to catch on, then DVD will become what VHS was: replaced.

3) Blu-ray. Yes, Blu-ray. Aren’t we at the point where we can just store our movies completely on a hard drive and can just download them from a third-party source?

4) Film. We have digital cameras now. In fact, I have one in my cell phone. Hello?

Sony won’t be discontinuing these floppy disks until March 2011. Better stock up if you’re one of those who believes in this format, like those guys who won’t give up on vinyl records.